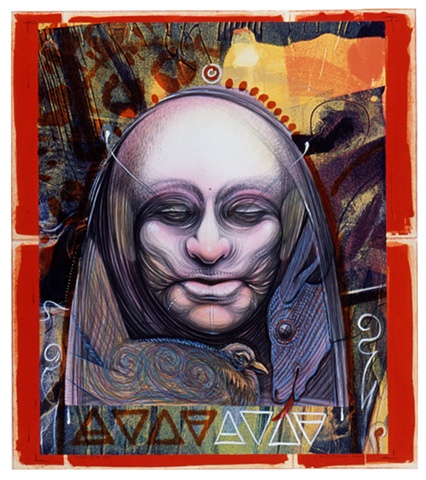 I work from intuition, looking for patterns and synchronicity as my images emerge. An eye, the bud of a rose and even the sensual nodes of pleasure that encourage ecstasy are phenomena of related beauty, shape and intrinsic meaning. For me, existence contains many such visual moments in confirmation of the idea that everything may be boiled down to the smallest, most essential elements of the broth of life. I work to trace these primal forms through an open-minded and sustained evolution of making marks and forms.

Oscar J. Gillespie is a Professor of Art at Bradley University, where he has been a member of the faculty since January of 1986. He teaches printmaking and drawing. As a printmaker, he is noted for his expertise in monotypes and in intaglio, especially metal-plate engraving.

Exhibiting widely since 1974, he has shown his work in more than 300 solo, group, invitational and juried exhibitions. His work may be found in more than 60 public collections, including the Fogg Museum, Harvard; The Museum of Fine Arts, Boston; the Denver Art Museum; the Lauren Rogers Museum, Laurel, Mississippi; the Walker Art Center, Minneapolis; the Nelson-Atkins Museum, Kansas City, the New York Public Library; the Plains Museum, Fargo, North Dakota; and the National Museum of Posnan, Poland.